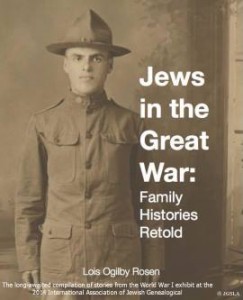 Jews in the Great War is a collection of 37 stories of the World War I experiences of Jews from all over the world. The stories and accompanying photos were initially exhibited at the 34th IAJGS Jewish genealogy conference, held in Salt Lake City in 2014. The book is partly a scrapbook and partly an exhibit catalog. The level of detail varies from story to story, the longest of which is 11 pages of narrative, photos and documents, with the typical entry consisting of a page or two of text accompanied by one or more photos and small family trees.

The stories, contributed by JGS members, encompass the breadth of the war, and experiences varied depending on where the ancestors happened to live at the time. There were family members who fought for the Allies, on the side of the American and Canadian Expeditionary forces, for the British and for the British Jewish Legion. There were those who fought on the side of what we would consider the enemy, since they lived in Germany or the Austro-Hungarian Empire. There are also stories of families who lived in the war zones, including some who managed to emigrate despite the difficulties of war.

Jews in the Great War is largely a scrapbook of war memorabilia and stories. Family members discovered service records, commendations, discharge papers, photos and other memorabilia, and used them to illustrate stories that had been passed down to them by family members. The inspiration for the book came from the photos and stories that were exhibited in the hallways of the IAJGS conference, which were subsequently collected and edited into book format.

Family history is more than names, dates and places. It is really about the people, and how they interacted with the world around them, to events that we only read about in history books. Jews in the Great War chronicles the experiences of many Jewish families who lived through the major historical event that was World War I. In some cases, those who served with distinction in Germany felt that it would protect them from the rising fascist tide in their post-war country. It didn’t, although some were fortunate enough to emigrate. A few of the stories are about relatives who were casualties of war, including two killed at the Battle of Verdun. For those whose relatives are now gone and have no family stories about this time period, this book is a good way to learn about actual wartime experiences of this watershed event, as seen through the eyes of those who lived through it, lovingly told by their descendants.