A.J. Jacobs: It’s All Relative: Adventures Up and Down the World’s Family Tree

It’s All Relative: Adventures Up and Down the World’s Family Tree

–  Names of towns, shtetls and areas of member research 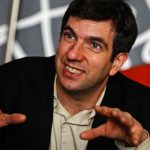 It’s All Relative is a book about A.J. Jacobs’s family. And also your family. Because it’s the same family. So as a (distant) cousin of his, you might want to check this book out.  Jacobs chronicles his adventure in helping to build the World Family Tree—a quest to unite the entire human race in one all-encompassing family tree. (Think six-degrees of Kevin Bacon, but we’re all Kevin Bacon.) It’s a historic project involving thousands of researchers and scientists, and it’s revolutionizing the way we think about race, ethnicity, history and the human species.  Here are some fun facts from  It’s All Relative:

Stirred by colossal curiosity, Jacobs dives deep into the genome. He attempts to convene the biggest family reunion in world history. He contemplates black sheep and bad apples, and the paradoxes of aspiring to both stand out as individuals as well as fit in. He unearths his own genealogical connections to Hollywood actors, Civil War soldiers, and real-life scoundrels. He investigates new types of families, from sperm donor siblin 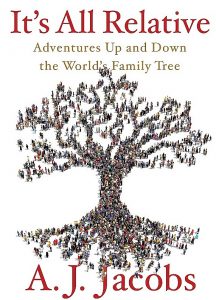 gs to group marriages. He examines the legitimacy of those DNA tests that purport to reveal your ancestry. He learns about his Neanderthal great (great, great, etc.) grandfathers. He meets thousands of cousins—from all seven continents. He has a beer with President George H. W. Bush and figures out his relationship to him (he’s Jacobs’s second cousin’s husband’s eighth cousin three times removed). Jacobs also figures out his relationship to the serial killer Jeffrey Dahmer (it’s through his wife, Julie’s, side).

In this era of tribalism and us-versus-them thinking, this extraordinary book is a profound exploration of what binds us all. In the words of Sister Sledge—who actually showed up at Jacobs’s worldwide reunion—we are family.

Arnold Stephen “A. J.” Jacobs, Jr. is an American journalist, author, and lecturer best known for writing about his lifestyle experiments. (Wikipedia)  He is the bestselling author of four books: he achieved enlightenment in The Year of Living Biblically, sharpened his mind in The Know-It-All, and become the healthiest person in the world in Drop Dead Healthy.  (The Year of Living Biblically will soon adapted as a sitcom on CBS, called By the Book, which stars Jay R. Ferguson and is executive produced by Johnny Galecki.) Jacobs is an experimental journalist, a contributor to Esquire and NPR, and the host of the podcast “Twice Removed.”  His TED Talk about the global family has been viewed more than a million times.

The JGSLA Traveling Library and mentors will be available starting at 2:30 pm.