In 2004, JGSLA had celebrated its 25th anniversary in several ways:

In recognition of the award, the JGSLA received a plaque from the IAJGS, which reads: 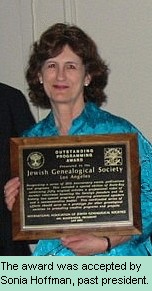 Recognizing a series of 25th Anniversary events, publications and programs.  This included a special edition of Roots-Key containing fifty original articles, a professional video of member interviews honoring the Society’s founders and its history, two special programs featuring prominent speakers and a commemorative booklet. This coordinated series of efforts should serve as a prototype for other genealogical societies in promoting creative programs and projects.