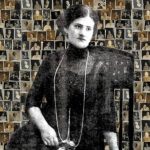 The extraordinary story of a woman who fought back against the criminal rings that ensnared her and the society that shunned her. During the early 20th century, thousands of Eastern European Jewish women were lured to Argentina with promises of marriage and opportunity, only to meet a sadder fate: a life of prostitution and degradation. The documentary, Raquel: A Marked Woman, tells the story of Raquel Lieberman–one of 30,000 shtetl girls sold into slavery by the notorious Jewish crime ring, Zvi Migdal, who operated international brothels from the 1860s until the 1930s. After the screening, join the filmmaker, Gabriela Böhm, for a discussion and Q & A.

Gabriela Böhm is an award-winning producer/director of moving documentary films that explore cultural identity, inspiring people of all faiths with their stories of resilience.