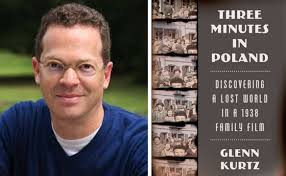 In 2009, Glenn Kurtz found old family films in his parents’ house. One, shot more than 70 years ago by his grandparents on vacation, included his grandfather’s hometown in Poland. “It was 1938 and there are beautiful images of children and adults. They’re so happy to be filmed, so excited to see these Americans coming to visit…not knowing what was coming.” Kurtz set out to restore the film and find the people in it. Three Minutes in Poland traces his four year journey to identify those in the people: a search that took him across the US, to Canada, England, Poland and Israel, to archives, film preservation laboratories, and an abandoned Luftwaffe airfield. Ultimately, he encountered seven living survivors, including an 86 year-old man who appears in the film at age 13.
Glenn Kurtz is also the author of Practicing: A Musician’s Return to Music. He is a graduate of the New England Conservatory-Tufts University double degree program and holds a PhD from Stanford University in German studies and comparative literature. Book sale and signing after the presentation. JGSLA members free, guests $5.
Questions?  directions found at: www.JGSLA.org