Book Review: ‘Secrecy and Deceit: The Religion of the Crypto-Jews’ by David M. Gitlitz

Home   /   Book Review: ‘Secrecy and Deceit: The Religion of the Crypto-Jews’ by David M. Gitlitz 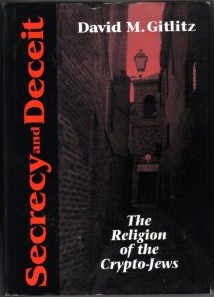 This book provides a masterful study of how Jews in Spain, Portugal, and their Western Hemisphere colonies attempted to preserve their religion and heritage against the persecutions of the Inquisition and the Catholic Church. Jews today generally are aware that those who practiced the Hebrew faith during the reigns of Ferdinand and Isabella were expelled from Spain in 1492. However, thousands had converted to Christianity and became “New Christians.” Others remained true to their faith and continued to practice Judaism-to “Judaize” in secret.

What makes Gitlitz’s book so fascinating is that crypto-Jewish culture was extraordinarily complex, so complicated, in fact, that it is almost impossible to generalize about it. Gitlitz solves this problem by examining crypto-Judaic practices in a succession of chapters that deal with every conceivable aspect of Judaism and Jewish life. To raise questions about Jewish marriage, death, holidays, food and dietary laws, and many other topics is to reveal the full state of Jewish culture that Judaizers attempted to preserve under increasingly adverse circumstances. Drawing on both well-researched studies and Inquisition records, Gitlitz creates a world where crypto-Jews lived under constant suspicion from authorities committed to erasing Jewish culture and religion.

Sad to say, over time knowledge of Judaism faded as succeeding generations passed on less information than what the previous generation had. This was partly due to the fact that marriage and child rearing under a dominant Christian culture meant that within families a sister might not be aware that a brother, or an uncle, or some other relative, was a crypto-Jew. Many Jews who converted to Christianity did so because conversion opened avenues to political or economic advancement in Spanish society. Even so, the Inquisition regarded New Christians as untrustworthy as some continued to practice the Jewish faith in secret. Syncretism and family ties also complicated matters. Descendants of crypto-Jews, even to the present-day, despite ostensible belief in the Catholic faith, practice bits of Jewish observance such as lighting candles on Friday evening. Some New Christians persisted in attending family affairs with Jewish relatives that celebrated bar mitzvahs or holidays. The end result of living in such an environment was an idiosyncratic religion that attempted to accommodate both a secret tradition of Judaism with a powerful Christian faith that dominated society with its churches, saints, and political control.

Gitlitz takes us into this strange world by drawing on numerous descriptions of crypto-Jewish life, taken from testimonies given by crypto-Jews under interrogation by the Inquisition. Records of confessions were carefully kept. Testimony was obtained either freely or through torture. Faced with punishments ranging in severity from fines to being burned alive, some crypto-Jews told what they knew, and possibly what they did not know. Ironically, the Inquisition helped perpetuate Jewish religious and cultural practices by publishing “Edicts of Faith,” guidebooks for informers that listed Jewish practices-available to crypto-Jews as a reminder of their faith.

One may conclude that in the end Catholic Spain, and to a lesser degree Portugal, succeeded in eradicating Judaism from their borders. Success, however, came with a great price: a repressive society that did not tolerate dissent or diversity, and the loss of a talented body of people who fled to other countries such as Holland that welcomed their business and intellectual skills. And despite the effort at ethnic cleansing, elements of Judaism persisted, though often in degraded and incomplete form, for several centuries. Readers of this book will admire the efforts of Sephardic Jews to keep their faith under the shadow of harsh persecution.