Book Review: ‘The Death of the Shtetl’ by Yehuda Bauer

Home   /   Book Review: ‘The Death of the Shtetl’ by Yehuda Bauer 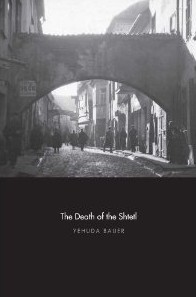 Yehuda Bauer, a renowned historian and author of My Brother’s Keeper, Rethinking the Holocaust, and many other books, has written a book that focuses tightly on nine shtetlach in the kresy, the marshes of eastern Poland, before and during World War II. He provides this definition of the shtetl: “A shtetl was a township with 1,000 to 15,000 Jews, who formed at least a third of the total population, and their life was regulated by the Jewish calendar and by customs derived from a traditional interpretation of the Jewish religion’ (p. 3). Bauer has no interest in injecting sentimentality or nostalgia into shtetllife and culture, and he dismisses Fiddler on the Roof as a fantasy, “a distorted and bowdlerized version of a story by Sholem Aleichem (which actually deals with a village, not a shtetl). In this sickeningly sweet, made-up world of Eastern Jewry, all Jews were deeply religious, naive, and clever, and the shtetl was a place where goodness and ethical uprightness ruled despite the difficult conditions” (p. 2).

With the coming of World War II the shtetlach were also targets for destruction by the Nazi war machine. However, in the pact between Germany and the Soviet Union, eastern Poland came under Russian control from September 1939-June 1941. In examining those two crucial years, Bauer finds that Jewish culture in the shtetlach crumbled almost overnight as Jews found Soviet rule offered them economic and political opportunities long withheld by anti-Semitic Polish authorities. But in the end the Jews were just buying time. Germany’s invasion of Russia in June 1941 placed the shtetlach under Nazi control and the ultimate Final Solution. The heart of this book describes the struggle for survival by the shtetl Jews and the hard choices they had to make. Bauer notes that Jews were divided over the question of whether to resist or accommodate. Zionists were factionalized to the degree that made unified resistance a difficult if not impossible goal.

Nevertheless, it was possible to conduct unarmed resistance, an Amidah, involving “mutual aid, education, health care, food smuggling, and morale building, chiefly accomplished by maintaining a minimum of cultural life” (p. 158). The opportunity for active resistance lay in fleeing to the forests of the kresy, and Bauer discusses the chances for survival there in detail. The odds were slim but in the end were better than nothing. Russian partisans might admit Jews to their otriads if the Jews brought weapons; or even might murder the Jews and take the weapons. Some Jews who joined otriads achieved rank and leadership. Others formed their own otriads, most notably the Bielski brothers. Many Jews who became partisans died fighting the Nazis. Bauer offers some interesting perspectives on Jewish motivations for becoming active partisans. Survivors state that they fought to avenge the deaths of family and friends. They expected no quarter and gave none to their sworn enemies. Relatively few Poles, Russians, Ukrainians, or Belorussians aided Jews whether they hid in the forests or joined the partisans.

Bauer demonstrates that the question of neighbors sheltering Jews or turning them over to the Nazis in exchange for food or money is a complex one, and generalized statements have many exceptions to the rule. It is this complexity that makes the death of the shtetl such an important matter. The shtetlach did not survive the Holocaust, but survivors of the war are able to tell the stories of their communities and how the war shattered a way of life that had existed for centuries.