A Border Town in Poland, A 20th Century Memoir

JGSLA invites you to our next meeting

A Border Town in Poland, A 20th Century Memoir

HERE is the link to the recorded meeting 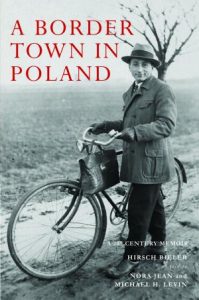 JGSLA is honored to have the daughter and son-in-law of Hirsch Bieler discuss with us the book they recently published based on Hirsch’s oral history.  His proudly Jewish first-person memoir of displacement, resilience, loss, and hope in serial ‘promised lands’ resonates in a world again flooded by refugees.  His dramatic life stories, shared with Nora Jean and Michael H. Levin, became their 40-year quest to document the vanished ‘life and times’ of a family diaspora from Poland to Germany, Chile, England, Denmark, Mexico, Palestine, and America.  The book traces Hirsch’s odyssey from early life in the Northeast Polish-Prussian border town of Grajewo, through starvation on WWI’s Eastern Front, his ‘adult adoption’ by a childless Christian couple and entrepreneurial rise in Weimar Germany, life “on my own” under Hitler’s Third Reich, to his flight with his young family from Leipzig to Tel Aviv and eventual U.S. citizenship.  His experiences — as teenage smuggler, then fur trader, Soviet-German petroleum entrepreneur, solo businessman after 1933 Aryanization, and attempted savior of family trapped by Soviet/Nazi invasions — capture in vivid detail the tumultuous events when luck, timing, and proper documents meant life or death.  They include a revelatory 1928 trip to Mandate Palestine that paved the way for his 1936 emigration there. 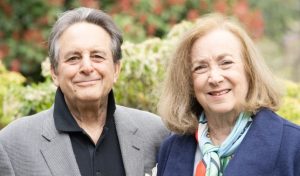 Nora Jean & Michael Levin:  Approaching our 8th decade, neither of us has time to ‘retire.’  Michael is a lawyer & writer based in Washington DC.  His work has appeared on stage & in three poetry collections plus anthologies & numerous periodicals, & has received poetry & feature journalism awards. He has spoken widely at U.S. & international forums (see www.michaellevinpoetry.com).   As former director of a long-distance caregiving non-profit, eldercare author & advocate, Jean has testified at Congressional hearings & appeared on (e.g.) the Today Show plus local/national TV/radio, & at the NY Armory Book Fair. She has been a high-school history teacher; Nader’s Raider; researcher at the Brookings Institution/National Academy of Public Administration; & co-founder of The Workplace, Inc., Washington DC’s first salon-type shared-office suite. Her “How to Care for Your Parents: A Practical Guide to Eldercare” (latest edition Norton, 1997) (a “Better Books for Life” finalist with 65,000 collective copies sold) led to her 13-year stint as director of Caring from a Distance (www.cfad.org). She has served on a U.S. Department of Education Advisory Committee, the 1995 White House Conference on Aging, & lifelong-learning advisory committees plus synagogue, mental health & women business-owner boards.  She is co-author of “Two Pianos: Playing for Life.”  https://www.twopianosplayingforlife.org/

There will be no physical location so the JGSLA Traveling Library and Mentors Corner will NOT be available for this meeting.

JGSLA MEMBERS FREE – NO CHARGE FOR GUESTS, ALL ARE WELCOME, members, please share the ZOOM link with folks you know.