Who can resist a mystery? 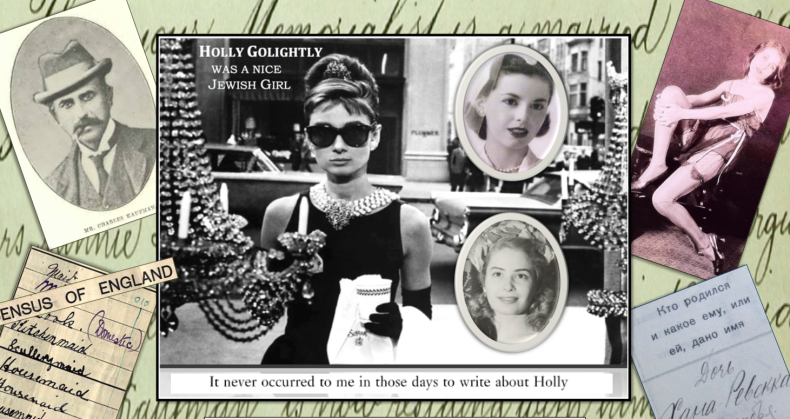 Ever wonder if there was more to your family history than meets the eye? Poor immigrant Jews arriving in Der Goldene Medina (the promised land) not only shed their old world clothing and shtetl names, but often completely reinvented their personalities, creating new identities and obscuring old ones.

From deadbeat, bigamist husbands to sweatshop maideles transformed into Ziegfeld chorines, explore the trajectories of these extraordinary lives through genealogical case studies. Hear the tale of two foster-home Bessarabian beauties who became muses to a teenage Truman Capote, Russian immigrant fishmonger Avram from Odessa who got “whacked by the mob” as gun-runner “Barney Blum” in the film-noir 1920s Los Angeles, and follow the trail of Charles Kaufman born in 1847 Lichtenau, heading to make his fortune in San Francisco, the west’s mining industry, then on to Australia’s Eastern Goldfields and finally to high society London, establishing three citizenships along the way. Using creative methodology and genealogical travel we’ll explore the twisted roads our ancestors traveled to establish a new life — or run out on an old one. Learn investigative techniques for uncovering the truth about your own amazing (but often hidden) family history.

Pamela Weisberger is the 1st vice-president of the Jewish Genealogical Society of Los Angeles, president of Gesher Galicia, and was co-chair of the 2010 IAJGS Conference. A professional genealogist, writer, and international lecturer, she specializes in Eastern European archival and historical newspaper research and created the Galician Archival Records Project.