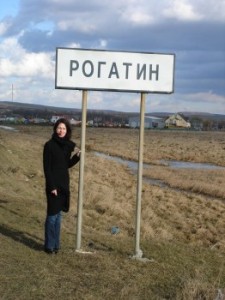 More than 65 years after the end of WWII, the physical artifacts of the once-flourishing Jewish community in the Galician town of Rohatyn (Galicia/Poland/Ukraine) can still be found: in the abandoned headstone fragments remaining around town today, ripped by the Nazis out of the Jewish cemeteries and used to pave roads and sidewalks; in the hundreds of scraps of paper and print discovered in 2011 in a building that once housed a synagogue, but which later housed the Rohatyn Judenrat; in the few structures still standing where Jewish families once lived or prayed. in the abandoned headstone fragments remaining around town today. Complimenting these physical traces of former Jewish life in the town of Rohatyn itself, are the hundreds of pages of documents and records found in archives, universities, and foreign repositories and locations.

Marla Raucher Osborn, a board member of the Gesher Galicia and a retired California attorney, will talk about living abroad for five months in Lviv, Ukraine for the express purpose of being within driving distance to her ancestral town of Rohatyn. She will share her 2011 discoveries within the town, as well as her research results and resources across western and central Europe, Argentina, Israel, and Ukraine, demonstrating that one never knows where relevant vital and family records for Galicia’s Jewish pre-War families may be discovered.

The Los Angeles Family History Library, with its free computer access to Ancestry.com, maps, gazetteers and Eastern Jewish microfilms, will be available for research from the hours 1:00PM – 5:00PM.