Ron Arons, of “The Jews of Sing Sing” fame, gets down to business in his own backyard, bringing the gangsters, thieves, moguls and madams of the western states to life.  Was grandma a grifter? Grandpa a Goldrush gonif? Uncle Harry a Hollywood heavy?  Whether your relatives were into bigamy, burying bodies, or bogus bonds, Ron will show you how to track them down, access their records, and put their mug shots up on your Facebook page. It would be criminal to miss this talk!  The presentation will also provide methodology and information about where source documents can be found for researching criminals anywhere in the United States focusing on Ron’s new book: “Wanted: U.S. Criminal Records Sources & Research Methodology.”

*Please note that this venue has changed from previous announcements.

Do you have a criminal ancestor in your family’s past? There will be time at the end of the meeting (5 minutes per person) for you to tell your own black-sheep genealogical story.  Contact Pamela if you are interested in participating. 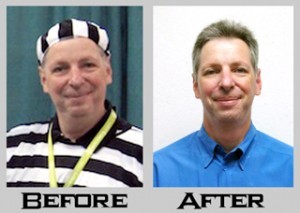 Ron was surprised to learn that his great-grandfather had done time in Sing Sing Prison… maybe there’s more to your own family history than you know!  Born in New York, Ron was reared a goodie-two-shoes.  Aside from four moving violations (including a “California” roll through a stop sign, doing 40 MPH in a 30 MPH zone, and driving with his brights on), Arons has never been afoul of the law. Ron became interested in understanding his roots after he lost both his parents to cancer 16-18 years ago. In the process of researching his criminal ancestor’s past, Ron has traced his roots to England, Poland, Romania, Ukraine, Belarus, and Lithuania. In 2005 Ron won a Hackman Research Residency Award from the New York State Archives to continue his research of New York Jewish criminals.

In January, 2008, Ron appeared on the PBS television series The Jewish Americans as the acknowledged expert on Jewish criminals of New York’s Lower East Side. Arons tours the country giving educational and entertaining presentations on Jewish criminals and Jewish genealogy. Ron earned a B.S. in Engineering from Princeton University and an MBA from the University of Chicago.

You can pre-order copies of Ron’s books:  “The Jews of Sing Sing” ($20) and “Wanted: U.S. Criminal Records Sources & Research Methodology” ($50) and Sing Sing tee shirts ($20) in advance and save shipping charges.  Ron will bring them to the meeting and sign them in prison person.  More info on these items at his website and you can email Pamela Weisberger to place your orders which are due by January 5th.